As president and CEO of Sovereign Brands, Brett Berish has created a slate of fast-growing wine and liquor labels known for their slick packaging and celebrity imbibers (and in some cases, buyers—in 2014, Jay-Z purchased Armand de Brignac Champagne, aka Ace of Spades, from Sovereign Brands for an undisclosed amount). The family-owned wine and spirits company, which Berish founded in 1999, is today responsible for such potables as Luc Belaire French sparkling wine, Bumbu rum and McQueen and the Violet Fog gin.

But for all the gregarious, party-hard vibes his business provides—Luc Belaire was notably popped by the Los Angeles Rams following their recent Super Bowl victory, and Bumbu counts rappers Lil Wayne and Rick Ross among its admirers—Berish, 53, is a family man at heart. The father of six, who lives primarily near Chicago but maintains additional residences in New York City and Florida, becomes animated when speaking about vacations with his clan and reserves the utmost praise for his rollerblading mother. “She’s my guru, my role model,” he says.

The spirits entrepreneur (who, prior to launching Sovereign, worked as a merchant banker) also created D’Ussé Cognac alongside Bacardi. Most recently, Berish has brought a new Cognac liqueur dubbed Villon to the market. “Success is the next brand. It’s the next thing for me,” he says.

What’s something you’ve done recently for the first time?

I just had my sixth kid, so it feels like it’s starting all over again. It’s new.

First thing you do in the morning?

I drink two cups of coffee, and I walk for two hours. I have a walking stick I whittled and sanded myself, and I walk anywhere from 7 to 15 miles a day. If I don’t do it, it ruins me.

What advice do you wish you’d followed?

Trusting my gut. It’s the most important thing. I have an expression I just told my team, “Consensus does not make for good ideas.” I wish I would have learned that earlier, but that comes with confidence and time.

What do you do that’s still analog?

Anytime I travel, I’ll go into a wine shop, a liquor store, a grocery store. I love walking down aisles, seeing brands that’ll never change, touching and feeling a brand. To me, brands are a personal thing, and that’s my favorite part of it.

How do you find calm?

I do a series called “Self-Made” where I interview people: influencers, celebrities, business people, sports figures. I like hearing the come-up part; I don’t like hearing success. Knowing that other people have gone through struggles is very relieving for me because I can understand it.

What’s the most recent thing you’ve added to your collection?

I own Charlie Bucket’s golden ticket from the original Willy Wonka film. I bought it at an auction from the director’s family, and I got the whole backstory. Everyone you mention the golden ticket to, it just brings smiles. I love it. It’s my most prized possession.

What’s the most recent thing you regret not buying?

A 1967 Volkswagen Microbus with 21 windows. I wanted it because I have six kids, and I just see my whole family in it driving around. And because of Covid, I didn’t pull the trigger, because I would have bought it without seeing it, and I needed to see it in person. But it was beautiful.

What’s the most impressive dish you cook?

It’s scrambled eggs with cheese, burnt bacon, a couple of sausages and toast. I can do that really well. You’ve got to have burnt bacon, though—burnt, really crispy bacon.

Success to me is constantly proving that our ideas worked. If I have a new idea, I want to see it become reality. Anybody can have an idea, but it’s making it real that’s the hard part.

How much do you trust your gut instinct?

My success has been based on trusting my instincts. And it’s when I didn’t trust them that it hasn’t worked.

Drive or be driven?

Drive. You’ve got to be in control, you have to.

Are you wearing a watch? How many do you own?

I own one watch. It’s one of the most special things I own because Rick Ross gave it to me, a gold Rolex. And it was engraved to me, “From one boss to another.” And I love it, I absolutely love it. It’s so heavy, it’s hard to wear.

The last time you unplugged?

This past summer I went camping with my three brothers, three of my kids, all my nephews. Three days camping in the woods, which was just awesome.

What’s the last piece of advice you gave?

Don’t be afraid to fail. I tell my team every single day: Try things; don’t wait for approval. If it doesn’t work, don’t worry about it. Life is like improv. You make it a little bit better every day.

What is your e-mail etiquette?

Follow up. I will always respond and as quickly as possible. To me it’s about respect.

What is the car(s) you are most attached to?

I have a 1988 Defender, which is restored beautifully. It’s got the seats that face each other in the back. We call it Frosty, as in Frosty the Snowman—bright blue. And I have a red Moke, which the kids named Sharktooth. It’s an electric car. It looks like a Jeep that’s been cut in half horizontally but goes 35 miles per hour. It’s street-legal, and it’s amazing.

What do you most crave at the end of the day?

It has to be a drink. I drink every single day, and at the end of the day is my favorite. I’ll pour a rocks glass full of one of the brands, and I’ll sit by myself and just chill. It’s my favorite thing to do. There’s nothing better. Yes, you should drink with friends, but I’m an excellent drinker alone.

Definitely Bowie. I don’t get Dylan.

Fri Apr 29 , 2022
Last fall, I bought this 2004 Ford Ranger XLT – a model I quite like, I must admit. There were the expected adjustments and fixits to be made on things under the hood of an older used vehicle, but after that, I understood in short order that the tires installed […] 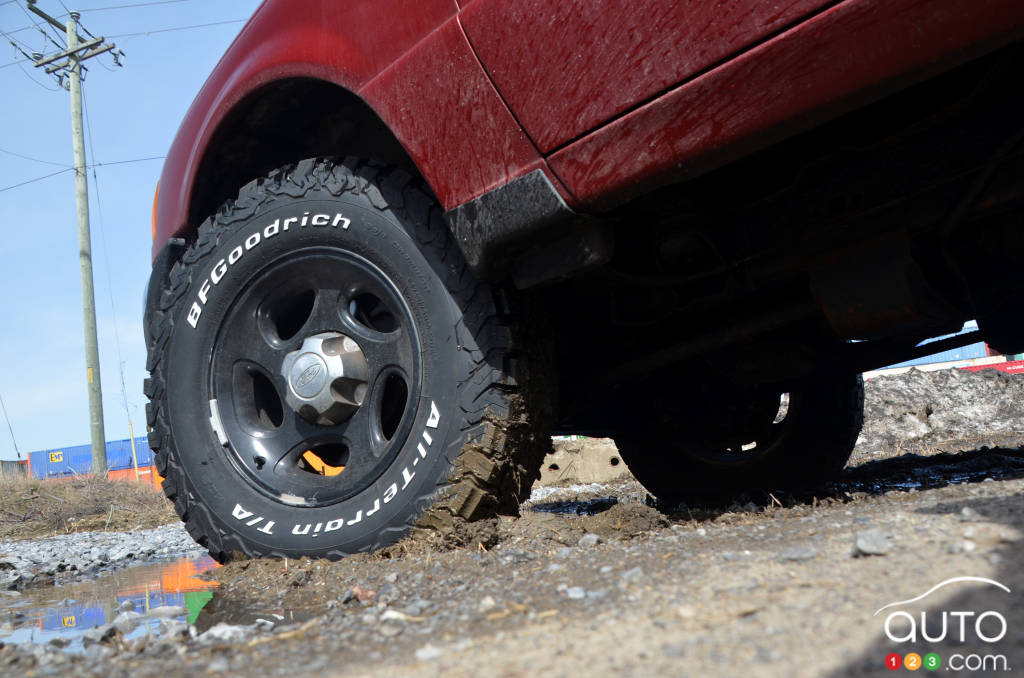